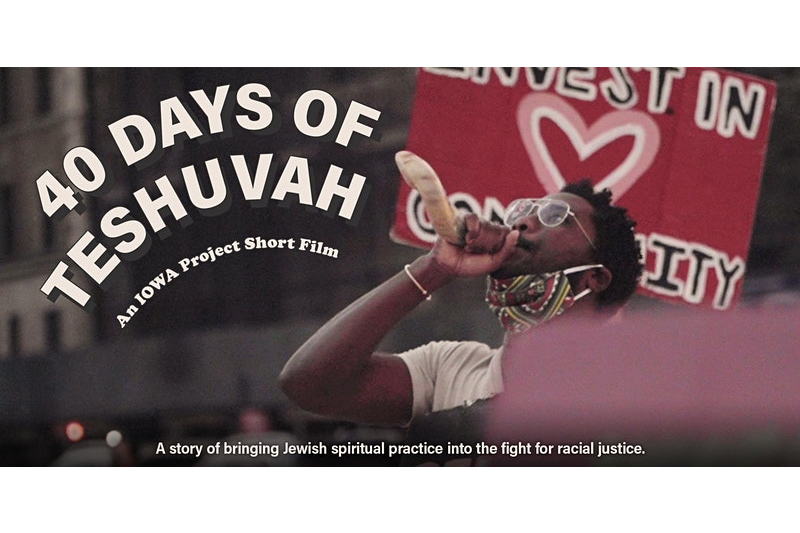 Reconstructing Judaism and the RRA have teamed up to offer our communities the opportunity to screen the short film “40 Days of Teshuvah”- a story of bringing Jewish spiritual practice into the fight for racial justice. Check out the trailer HERE.

Join The IOWA Project for our community screening, discussion, and live panel Q&A for the short film, 40 Days of Teshuva.

Join us for Tisha B’Av on Sunday, July 18th at 1pm ET / 10am PT for our community screening for 40 Days of Teshuva, followed by a guided discussion around the themes and spiritual tools present in the film, and share ideas around how Jewish spiritual practices can be integrated into our own efforts for repair and justice.

At 2pm ET, filmmaker Hannah Roodman, action organizer Yehudah Webster, IOWA Director Rabbi David Jaffe, and others will join us for a live Q&A discussion around the film, and the racial justice work ahead.

Jewish communities around the world are hosting community screenings of The Inside Out Wisdom and Action (IOWA) Project’s short film, 40 Days of Teshuvah. This event is the culmination of these screenings, bringing us together on Tisha B’Av. The film offers a powerful model for integrating Jewish spiritual tools and technologies like prayer, teshuva and Mussar into the work of social change in general and racial justice in particular. The short film, by director and producer Hannah Roodman, documents last summer’s 40 Days of Teshuvah action in Grand Army Plaza. Yehudah Webster and Jews for Racial and Economic Justice (JFREJ) protested for 40 days culminating with Tisha B’Av 2020. This demonstration came to being after the brutal murder of George Floyd and the racial justice uprising last summer. For 40 Days, organizers cried out to the heavens, blew the shofar, and mourned the destruction of black and brown bodies at the hands of the racist systems that exist today.

On Tisha B’Av we commemorate the darkest moments in our Jewish history and move from brokenness towards redemption. It is a universal redemption we seek and, by necessity, will come about through righteousness and justice as the prophet says, “צִיּ֖וֹן בְּמִשְׁפָּ֣ט תִּפָּדֶ֑ה/ Zion will be redeemed through justice” (Isaiah 1:27). As we emerge from the destruction of the COVID pandemic, we have a fresh opportunity to reengage in the work of repair both at the level of our intimate communities and in the broader society.

Learn more about the film, and other opportunities to screen the film at InsideOutWisdomAndAction.org/40days

The Inside Out Wisdom and Action Project is a network of activists, educators, and spiritual leaders in the Jewish community supporting social justice leaders in exploring Jewish spiritual wisdom and developing Jewish spiritual practice. We are driven by the belief that integrating deep spiritual wisdom into our justice work allows activists to lead from a place that is more visionary, creative, sustainable, and grounded. The IOWA Project aims to help community members build bridges between their spiritual lives and their activist lives through study groups and leadership and facilitators cohorts to learn, practice, and grow into deeper Jewish spiritual practice through Mussar and Chassidut. Learn more about their work at InsideOutWisdomAndAction.org and follow them at @insideoutwisdomandaction